led by the Institute for Chemistry and Biology of the Marine Environment (ICBM),
University of Oldenburg (Germany) and Schmidt Ocean Institute (CA, USA)

Currently, we plan the first dedicated multidisciplinary research cruise to increase our understanding of the significance and role of the air-sea interface (sea surface microlayer, SML) as the boundary layer controlling atmosphere-ocean interactions. The overall objective of this proposal is to gain a detailed and mechanistic understanding of the link between interfacial processes at the sea surface and marine biogeochemical cycles, air-sea interactions and climate. The SML, the interfacial boundary layer between the ocean and atmosphere (typically 40-100 µm thick), has been widely ignored by past and current research efforts, although influence of the SML in air-sea interaction has been known for several decades. Through a holistic approach that will be executed by an international multidisciplinary team (Germany, UK and USA), this study will have widespread and significant impact on the science of marine biogeochemistry and climate related processes at a global scale. Therefore, we conduct the first cruise fully dedicated to the SML that links various multidisciplinary aspects together, such as atmospheric deposition, aerosol chemistry, gas and heat exchange, sea surfaces as microbiological habitat and new technologies for in situ sensing. The holistic and multidisciplinary approach of coordinated observations and analysis utilizing a number of state-of-the-art technologies, such as remote-controlled catamaran, unmanned airborne vehicles and trace-metal clean sampling devices (Fig. 1). Application of Next Generation Sequencing will enable us to explore microbial communities at the sea surface to a level never done before. 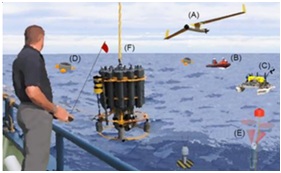 The research will be conducted on the R V Falkor(Fig. 2) operated by the Schmidt Ocean Institute, CA, USA.The R V Falkor is scheduled to embark Darwin on the 10 October 2016. The cruise track includes nine stations in the Joseph Bonaparte Gulf and Timor Sea (Fig. 3)as well three open ocean stations in the Pacific. The cruise ends on 7 Nov 2016 in Guam. 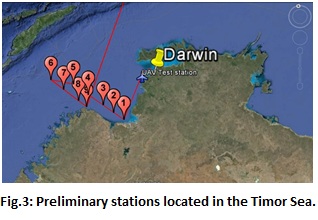