Almost nothing is known about the biodiversity values of Australia's Indian Ocean Territories and Exclusive Economic Zones (IOT) around the remote Cocos (Keeling) and Christmas Islands. This has impeded conservation management and there are no marine parks proposed or designated across these regions. Australia's National Representative System of Marine Protected Areas is therefore incomplete. The fauna around the seamounts and islands of the IOT are likely to be different from anything else that occurs in Australia's marine estate. The seamounts occur in the path of the Indonesian Through Flow (ITF) carrying water from the Pacific to Indian Oceans. The seamounts are mostly of late Cretaceous age (65-80 my) and may harbour ancient endemic communities. Seamount communities worldwide are highly vulnerable to disturbance by fish trawling, demersal longlining or mining for cobalt-rich ferromanganese crusts, particularly if they harbour vulnerable coral communities.

This project has been granted 45 days on Australia's Research Vessel 'Investigator' to map and describe the biodiversity values of the territories' EEZs. It will assess the biological relevance of the bioregional scheme previously proposed from oceanographic and geological data using model-based statistics. It will assess the endemicity of the fauna, testing whether selected deep-water fauna of the Indian Ocean are endemic or connected to the western Pacific. This work will assess the conservation significance of the seamount fields, including the presence of vulnerable marine ecosystems (VMEs) such as mesophotic and cold-water coral beds. An important focus of the voyage will be the communication of the biodiversity values of the area to the broader community through an extensive media program.

Australia's Indian Ocean Territories, including the Cocoos (Keeling) Islands and the Christmas Island Exclusive Economic Zones, in the region of 10-15°S, 94-108°E. 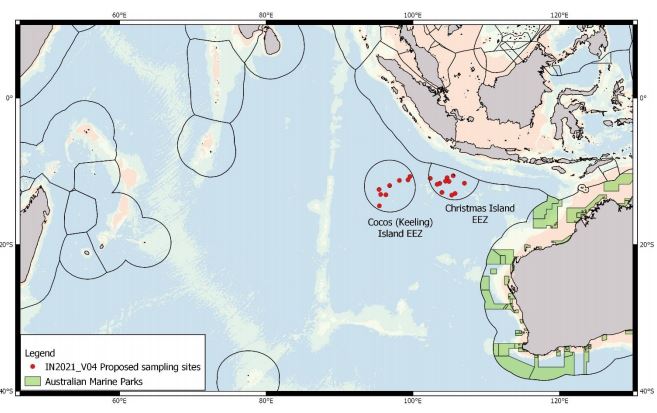