The current systems of the Eastern Indian Ocean show dynamic seasonal and interannual variations responding to seasonal monsoon and climate variability as well as climate regime shifts. The biogeochemical cycling and ecosystem of the Eastern Indian Ocean also change with the physical oceanographic regime. Since the Eastern Indian Ocean is located at the most populated region of the world, the ecosystems there are also influenced by various anthropogenic perturbations such as pollutants, plastic debris, overfishing, etc. The Eastern Indian Ocean is, however, seriously understudied region relative to the Pacific Ocean and the Atlantic Ocean, due mainly to paucity of in situ observations, hence our knowledge on the physical, biological, and biogeochemical processes are limited. Understanding the mechanisms of biogeochemical cycle and ecosystem responses to natural and anthropogenic perturbations, as well as variability in physical conditions, is an emergent issue since increasing human activity is degrading the quality and quantity of marine ecosystem services, on which our society is dependent.

In order to tackle with the emergent issues, it is essential to take an interdisciplinary approach, under which physical oceanographers, biogeochemists, biological oceanographers, and atmospheric chemists work together to unveil physical-chemical-biological interactions in the Eastern Indian Ocean. This research cruise, using R/V Hakuho-Maru, provides one such opportunity and in situ data for better understanding of the above key issues.

The target area of this cruise is the eastern Indian Ocean. There are two legs in this cruise (Leg-2 and Leg-3) that we conducted measurements. Leg-2 focuses the Bay of Bengal and equatorial eastern Indian Ocean, while Leg-3 observed in the regions of the Indonesian throughflow and Ningaloo Nino/Nina between Indonesia and Australia. The following figures indicate the cruise tracks and locations of observation stations. 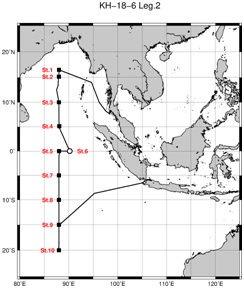 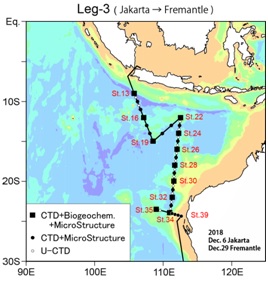