The deep and abyssal (> 4000 m) oceans act as a reservoir of heat and carbon on the Earth and play a crucial role in regulating the Earth's climate from multidecadal to millennial time-scales. Sustained hydrographic observations from the last three decades have revealed compelling evidence of temperature, salinity, density and tracer changes in the abyss ocean. In the Southern Hemisphere, abyss warming is widespread, except in the Crozet, Madagascar and Mascarene basins in the southwestern Indian Ocean, where anomalous cooling stands out. At least half of the northward inflow of abyss waters in the entire Indian Ocean (IO) is through these basins (in the IO, no surface-forced deep or bottom water is formed in the North).

In 2018, after 23 years, the US GO-SHIP program occupied for a second time the I07N line in the western IO. The section started with about 270 km of the Atlantis II fracture zone (FZ), the main gateway for the abyss water into the Deep Madagascar Basin (DMB). A comparison between the new and previous WOCE observations revealed an astonish increasing in chlorofluorocarbons (CFCs) below 3500m, from 30S until the Amirante Passage at 8S that connects the Mascarene and Somali basins. A back-of-the-envelope calculation using the tracer concentrations indicate that part of the DMB abyss has been ventilated somewhat recently. Where did these abyss waters come from and how did they spread so fast in the DMB? Do these changes indicate variability in the Crozet-Madagascar water exchange and the Indian Ocean Meridional Overturning Circulation strength?

In the most current description of the DMB abyss circulation, nearly all of the Atlantis II inflow is carried westward at about 31-32S to a narrow, northward-flowing Deep Western Boundary Current (DWBC). This circulation pattern seems to be inconsistent with the 2018 I07N observations, which took place at 54.5E, about 600 km from the narrow DWBC, and motivated the current proposal.

A second pathway that was previously proposed in the literature and discarded as unlikely was a slanted oriented flow that would connect more or less directly the Atlantis II FZ inflow to the DWBC far north at 23S. This interior pathway would cross the I07N, which might explain the relatively high CFC content and cold bottom layer in the mid-basin. However, the sparse hydrographic observations available are not sufficient (and are perhaps inadequate) to evaluate any of the two abyss circulation patterns.

Here, we propose a field experiment to be completed in 2020 that is designed to assess the two hypotheses for the abyssal water pathways entering the DMB through fracture zones. To determine the pathways and the transformation of the abyss water in the DMB interior, we will deploy an array of neutrally buoyant floats composed of 75 RAFOS and two Deep SOLO floats. We have been using particle tracking simulations to optimize the array design. A numerical model spanning the same period as the observations will be used to help answer our burning questions: Where do these abyss waters come from? How did they spread so fast in the DMB?

Our study region is the Madagascar and Mascarene basins in the Southwest Indian Ocean. Our field experiment planned to September/October 2020 (20S-35S, 50E-65E) will consist of deployment source sources (filled circle in the maps), RAFOS floats and Deep SOLO Argo. Besides that, we will collect temperature, salinity, oxygen and nutrients, CFC and SF6 tracers from the sea surface to the bottom in 42 stations (stars in the map). We will depart and arrive in Port Louis, Mauritius, and we are requesting a UNOLS ship for the experiment. We welcome IIOE-2 colleagues and students to piggy-back in our field experiment. 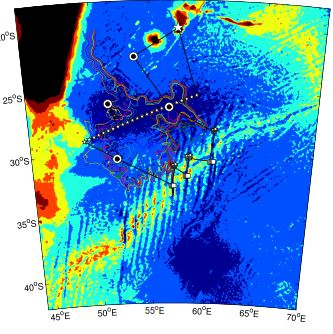