[IIOE2-EP25] Integrated heat Dynamics of the Indian and Global Oceans

The recently recorded abrupt increase of heat uptake in the Indian Ocean has been projected to have a major impact on global climate variability. The overarching aim of this project is to describe and quantify the evolution of this heat uptake in the Indian Ocean and to understand its impact on the global ocean and climate. These aims will be carried out through the following objectives:

This project will aim to get measurements at the mouth of the Indonesian Throughflow outflow passages, in a segment connecting the most northwest point of Australia to the western Lombok basin, using two separate glider campaigns. Each campaign will deploy two slocum gliders, equipped with ADCPs, ideal for measuring the transport of the ITF directly into the Indian Ocean basin. In the first campaign, the two ADCP slocum gliders will be deployed right before the onset of the southeast monsoon (June), and in the second campaign the two ADCPs slocums will be deployed before the onset of the northwest monsoon (December). The estimates of the outflow passages from the gliders will provide completely novel measurements that will be key in determining the heat transport into the Indian Ocean basin 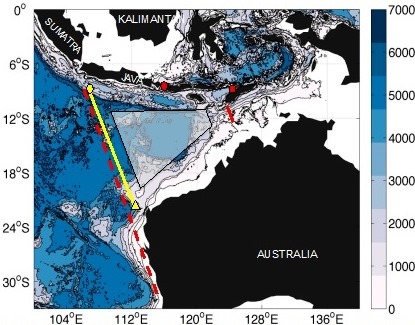