The underwater glider ‘Challenger’, on circumnavigation of the Indian Ocean, successfully completed on its first leg travelling from Fremantle, Australia to Mirissa, Sri Lanka. It departed Australia on 5 November 2016 and reached Sri Lanka on 30 September 2017.

The ocean glider spent 330 days at sea which is a record for Rutgers University glider missions. It covered a distance of 7,570 km, setting a new world record for an underwater glider flight. This beats Rutgers University's own record of 7,420 km set by another glider, RU27, in 2009. In addition to this, even after 330 days at sea there was virtually no biofouling of the glider, it looked the same as the day it was deployed – give or take a couple of random barnacles.

The Challenger is on a circumnavigation mission of the Indian Ocean over a 3 year period. After a change of batteries the glider will travel to South Africa and return to Australia.

This ocean glider mission is a joint project between Rutgers University, USA and The University of Western Australia (UWA) which operates the IMOS Ocean glider Facility. The Mission has been endorsed by IIOE-2 as an activity of key relevancy to the IIOE-2 Science Plan (www.iioe-2.incois.gov.in/IIOE-2/EP08.jsp; Project Leaders Dr. Charitha Pattiaratchi, chari.pattiaratchi@uwa.edu.au and Dr. Scott Glenn, glenn@marine.rutgers.edu).

Underwater gliders, like their airborne namesakes, are not propelled by an engine. Movement through the water is achieved through changes in buoyancy. By alternately reducing and expanding their volume, gliders can descend and ascend through the ocean using very little energy. In addition to controlling ascent and descent, rudders on the glider enable its direction to be changed. The glider can descend to 1,000 metres and then rise to the surface to transmit the data obtained. Challenger is piloted by remote control via satellite from Rutgers University and UWA.

On its way to Sri Lanka, Challenger had been sending data back to the lab via satellite. Its position can be tracked via the IMOS Ocean gliders Facility website or via the Rutgers University site. It is also available through the IMOS Ocean Current website. Measurements of temperature and salinity at depths up to 1000 m are available in near real time. 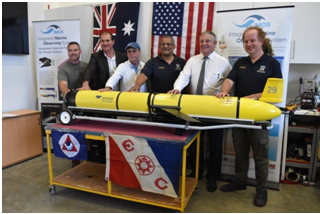 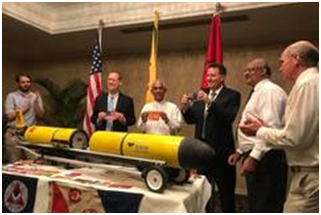 In the true spirit of international cooperation, letters of support for the Challenger mission and flags of several countries including that of India travelled inside the Glider from Fremantle and were recovered in Sri Lanka.

Challenger just after its deployment off Fremantle

Recovery of Challenger off Sri Lanka 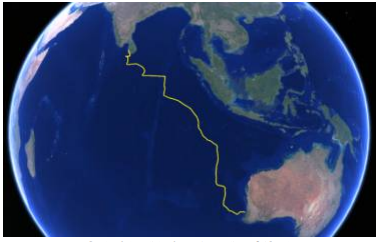 Path of the glider from Australia to Sri Lanka

In the true spirit of international cooperation, letters of support for the Challenger mission and flags of several countries including that of India travelled inside the Glider from Fremantle and were recovered in Sri Lanka.